Well, balls. It's six books and an intro page this week, apologies. I haven't quite finished the seventh yet, as the travelling and comicon I'm at have interrupted things, perhaps unexpectedly. Chicago is great but the jetlag is less so. But I think you'll like the intro page though - it ends very grandly.

Previous posts for this National Poetry Month reading endeavour are here and here, and explain the nonsense of what I'm doing...

JO Morgan, In Casting Off (HappenStance, 2015)
A strange sort of love story, told across the whole book in separate poems. A remote coastal village, and somehow a love of the remote, of the sea, of the brutal realities of life and death, all woven in. Lyrical, delicate, very musical in the way the words chime against each other. Like a folktale almost, or a set of folk whispers. Seals and bears and the shedding of skins.

Eds. Rachel Piercey and Emma Wright, Campaign in Poetry (Emma Press, 2015)
A meaty pamphlet anthology, published between the last election and the referendum, but I wanted to bring it out again as it seems timely. An incitement to write about politics, to engage, to avoid being didactic. Lots of playful metaphors and nuanced delving: historial, political, colonial, contemporary. All strong pieces. Poets include Kayo Chingonyi, Mona Arshi, Luke Kennard, Jon Stone, Holly Hopkins and lots more.

Simon Armitage, New Cemetery (Propolis Books, 2017)
Not the new collection, but a beautiful tall thin black and white illustrated hardback I picked up in the Waterloo Foyles. A new cemetery, and a new poetry sequence, under construction. A whole drift of thoughts connected, running in tercets. Like all the best fictions, opens with a map. It addresses the reader directly throughout. Each spread is a new abstraction of line and colour behind the words. The poet is in his shed. The poet thinks about lovers locking their wishes onto the railings at Pont Neuf. The poet thinks about the new cemetery being built in the hills. Simple. Abstract. Visual. Stark.

Denise Riley, Dry Air (Virago, 1985)
Lots about text here. The perfect poetry to read on a journey, in transit, in between countries. A disruption of language, often, a disruption of received rules of the use of language to shift emphasis, perspective. Some selections from other volumes, Marxism for Infants and No Fee, some versions of Hölderlin. Pieces about gender, feminism, history, purpose, family - lots of moments and images. Places. Ambitions. A feeling of being lost and trying to piece things together with words. It's great. To be held more than just once in the lap on a long-haul flight.

CK Williams, The Singing (Bloodaxe, 2003)
I know lots of individual CK Williams poems, but not many full collections, so here's one, one of many from a long career. He has a very familiar colloquial sort of voice. He's a good storyteller, but constructs it all carefully in regular formal structures. Lots of symbolism (clear, not surreal). I was interrupted reading the third section, which is a nine-page elegy for artist Bruce McGrew, and felt horrified that I hadn't been able to read it in one go, as though the interruption was a mark of disrespect. The book is notable especially I think for the final section, with poems written during and after the Iraq War, about fear, political insanity, uncertainty, and a world of despair.

Matthew Welton, The Number Poems (Carcanet, 2016)
Useful lines by way of introduction: "The mind is multiplicity."; "The way we construct the distinctions between things relies solely on our hunches." There are so many ideas and fun and games here, that it's nice to sink into them and reread and let them swirl around. Lots of shifting sequences which change in minute variations. Something about repetition. And curiosity. And thought. Reimagining worlds, words, meanings and how we construct them. Also: apple waffles.

Stephen Crane, Poems (Chatto & Windus, 1972)
So, yes I ran out of time here, only twenty pages in to a sixty-four page book. I'll be finished with it later, but due to the time difference I won't get a chance to post this until Sunday. I'll add the write-up onto next week's though. Here's the first paragraph of the intro page to the book as a tease. Isn't the last line spectacular? 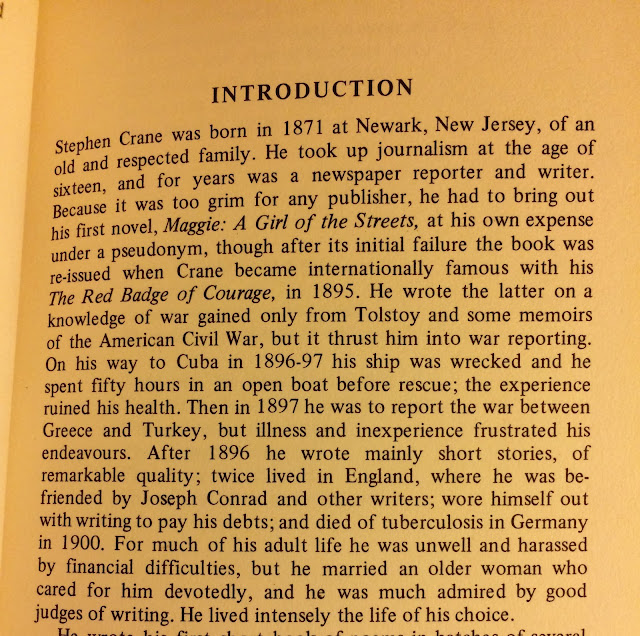