We made a book - look! It's called Over the Line: an Introduction to Poetry Comics:

It's the first anthology of its kind: a general introduction to Poetry Comics, featuring both brand new work and the work of existing practitioners, with an extensive introduction musing on both this new hybrid artform and the differing disciplines of poetry and comics themselves. It's playful and it's a jumping off point, both a teaching tool and a "fresh and stimulating" read, exploring what these two differing artforms might have to offer each other. Legendary writer Alan Moore said "I really can't recommend this venture highly enough".

This book has been a year in the making, a year which also saw two successful exhibitions and a wealth of workshops in London and Brighton, encouraging poets and artists (both adults and children) to work together to create something new. It started with an article I wrote for Poetry Wales in the summer of 2014 (issue 50:1) called 'Miremur Stellam: Poetry and Comics'. Here's an extract from the introduction:

"Reading more, trying to unpack the language of comics, the language of panel transitions and the blanks left for the reader's mind to fill in, I began to see more and more similarities between comics and poetry...  "


I'd been editing my partner's comics (he is a comics writer) on a freelance basis for a number of years (something I now do almost full-time). My background is in book publishing and the shift into comics brought a steep learning curve with it. I think I'd just forgotten how to read comics at some point, and had to retrain myself not just to read the words and speech balloons, but to read the pictures and panel transitions. I found Scott McCloud's Understanding Comics a useful and thought-provoking guide into this new world. As a poet, I was already interested in the power of language, and so seeing how it worked in this new context, alongside images displayed in a narrative sequence, was fascinating. I remember my writer's head more or less exploding the first time I read through Scott McCloud's description of panel transitions, which you'll find here. The conversation for me revolves around both mediums' use of the line - trying to do more with less, and understanding that the reading process, how we manage the space between the words and images, happens off the page as well as on it. Here are two pages from the book's introduction: 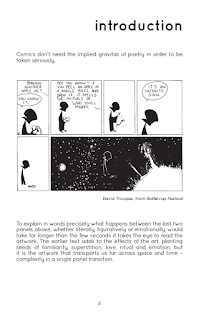 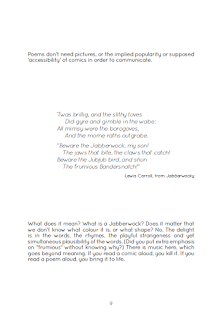 Actually my interest in poetry comics started earlier than the Poetry Wales article. In September 2012, I did some teaching for Poetry School. They asked me to pick something "a bit unusual" to teach on that would run for two weeks as part of a wider course being taught by younger poets. Poetry Comics leapt naturally to mind. Anne Carson's Antigonick (a "comic-book presentation of Sophokles' Antigone") had come out that summer, and I'd written an article for the then Penned in the Margins' online journal Hand + Star about it. I was exploring the work of Bianca Stone, who had illustrated Antigonick, and finding other artists who were working in this area and actively calling it "poetry comics". By no coincidence, this Comics as Poetry anthology came out in 2012 too, and the Poetry Foundation in Chicago put on an exhibition that year called Verse, Stripped: A Poetry Comics Exhibition. Something was starting to happen. The teaching sessions went really well. We looked at these existing pockets of work and then attacked blank pages with scissors, glue and colour to create our own.

After my formal teaching finished (though I did do some more one-day workshops for the Poetry School), it spilled over into an informal monthly workshop in a set of pubs in SE London. Here's what it looked like:


These sessions have continued to run over the past three years (which seems staggering to me now I write it down), and after each session I scanned in everyone's work and made it available online via the issuu site here so anyone who wanted to could take a look. Tom Humberstone, my co-editor for the Poetry Comics book, has been instrumental in these sessions. At some point in 2014 both the Poetry Library at Southbank Centre and the Poetry Society (both in London) approached me about putting on an exhibition of Poetry Comics work. As part of these conversations, the idea was suggested that I apply for Arts Council funding to help with the thinking behind the exhibitions, which quickly mutated into the idea to produce a book that might offer a lasting legacy to all these activities. So, 2015 was the year in which I was thrilled to be granted funding by the Arts Council, in which two major exhibitions took place, and various public workshops continued to pepper the year.

The Poetry Library exhibition ran from May 12th til mid July, and was a huge success. It offered a mix of new and old work, much of it found in the Poetry Library's own archive, and it brought many people to the Library who had not visited before. As part of the funding for the project, I also produced a learning resource and worksheet (you can download it here) that was used by multiple school visitors, and in particular with specially-requested sessions with children from West Thames College and Reading Bluecoat School. Here are some photos from the exhibition itself and the launch night: 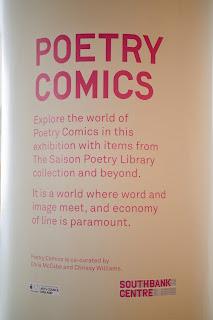 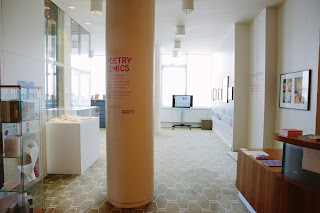 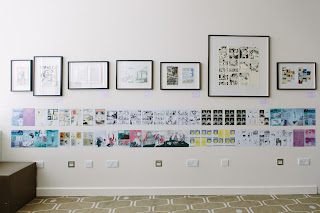 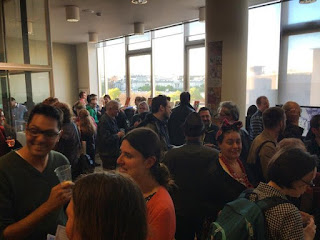 The Poetry Cafe exhibition ran from 3rd September til the end of October at the Poetry Cafe in Covent Garden. Composed of different work to the first exhibition, this one actually displayed pages from the finished book. Ah yes, the book. The book was happening behind the scenes all this time! We set an open call for submissions, which seemed to be the most democratic way of organising things. Within the call, we added links to different existing practitioners' work, so people could get an idea of what we were after - work that seemed to be challenging the limits of conventional poetry and comics together. We had a wonderful response, far more excellent work than we could possibly publish, and the editorial process was not an easy one. I was very glad for Tom Humberstone's excellent hand in it all, not only in the selections, but in overseeing the look and feel of the book itself. We decided early on that it would be best to work on the book together - someone with a poetry background, and someone with a comics background. You'll find out more about Tom's work here. We timed it so the book would be ready for the first day of the exhibition. And, miraculously, it was. The printers, local London co-op Calverts, provided us with uncut page proofs of the book which we then used in the exhibition. Here are some photos: 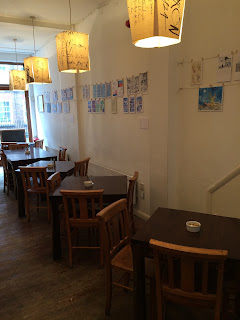 If you'd asked me three years ago whether I thought a set of informal workshops in a pub with poets and artists might result in a book (a book that Alan Moore feels is worthy of interest!) I never would have believed you. I've built up to this slowly and incrementally, taking new steps initially out of curiosity, and then pushing further and looking deeper with support from the Arts Council and by people in organisations like the Poetry School, Poetry Society and Poetry Library. I'm so grateful to every piece of encouragement I've had along the way and am really proud of everything we've managed to achieve this year - not just the book, showcasing other people's new work, but these groundbreaking exhibitions and workshops. I hope that together they've built a solid foundation from which more writers and artists may leap into exciting cross-genre explorations in the future.

If you'd like to buy a copy of the book, you can get it at the publisher's website, or as a digital edition at Sequential.