Well, the BEAR is well and truly launched, at last! I want to say thank you to everyone who came along to help celebrate or sent kind wishes, and I especially want to thank my friend Katie who brought me a sketch showing my favourite drag queen Katya drawn as a bear.


It was an amazing evening. It was unnervingly warm, but it all went okay as we were able to spill out into Exmouth Markets behind the hall. We milled about at first, chattering away, everyone trying to decide whether the red-curtained room was more Twin Peaks or Moulin Rouge, and then at eight I read the first bear in my book.


After that, Richard Scott, Anna Selby and Ed Doegar all also read bears. Richard found this great Maxine Kumin poem, Anna read this Ogden Nash delight, and Ed this stunning Ingeborg Bachmann poem (in english). Everyone wanted to read this Galway Kinnell poem, but we decided it seemed a bit long and not quite appropriate for the evening in the end. They were all utterly wonderful and I was so glad to have them there to help fill the night with bears.


Then I read another couple of bears, got confused at having to do an encore (which I'm sure is the only time it's ever going to happen to me) and there was general merriment and happy funtimes, followed by some actual dancing. The three highlights of this for me were: Anna Kate-Bushing it across the stage to 'Hounds of Love'; everyone rushing onto the dancefloor for 'Modern Love'; and enjoying '212' in a church hall and in front of my mother-in-law with that lyric.

I was expecting it to feel a bit like a birth or at least a birthday, maybe - as if the book has been in gestation for a very long time, and now it is finally out and exciting! But, actually, it felt more like a wake or a launch in the viking sense, like setting the poems on fire and pushing them out to sea, out into the world beyond. I don't mean that in a sad or violent way, but in a cathartic way. It's as if those poems used to just belong to me, but now they don't, but it's a good thing, because it also means I can begin to move past them. And, despite having been a bit writer-blocked in the months leading up to the launch, I've been scribbling loads ever since, which is an enormous relief.

So thank you to everyone who came and marked the moment of the book's arrival, or passing, or passing on, or whatever it is. I want to say "Go, little book, go" but I'm not so much nervous for it, as satisfied to see it set off into the world and find its own way. It's not even a book, but is now a beast wandering happily, raising a curious snout to the air, and hopefully able to shrug off any peripheral nonsense it may encounter, because it is a goddam bear.

And the bear will be busy over the summer! I've just come back from the Kendal Poetry Festival, which I hope to write about here shortly as it was so amazing, as well as the South Yorkshire Poetry Festival, and I've got a bunch of other readings planned up and down the country soon too. You'll see the list below, and can find out more details on my events page.

Oh - I suppose I should include a link here to the actual BEAR itself too, right? Right. 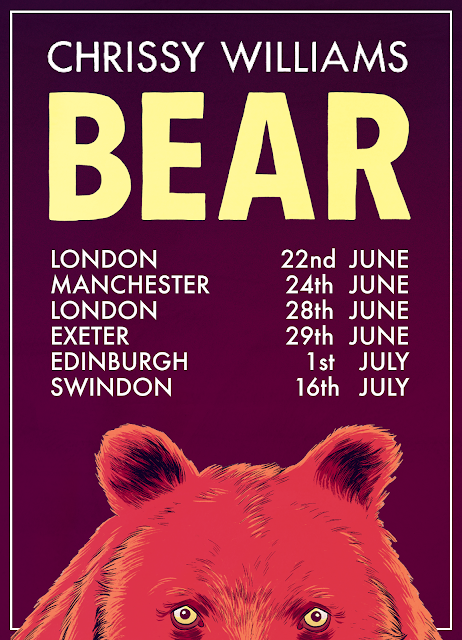