The first of these “what on earth does it mean to have a first full collection published” interviews went up yesterday and was with Joey Connolly. I’m asking a few different poets for their thoughts and will be posting them across the week, and today’s lovely generous interview comes from Khairani Barokka.

Khairani Barokka is a writer, poet, and interdisciplinary artist, who has presented work extensively in ten countries, and is the recipient of six residencies and multiple grants. Among her honours, she was an NYU Tisch Departmental Fellow, and Vermont Studio Center’s first Indonesian writer-in-residence, and is a UNFPA Indonesian Young Leader Driving Social Change for arts practice and research. Okka is creator of works for the stage such as Eve and Mary Are Having Coffee, co-editor of HEAT: A Southeast Asian Urban Anthology (Fixi 2016) and Stairs and Whispers: D/deaf and Disabled Poets Write Back (Nine Arches 2017), and author-illustrator of Indigenous Species (Tilted Axis 2016). Work is published in Poetry Review, The Rialto, Ambit, The New Inquiry, Asymptote, and many other journals, anthologies and art books. She is a member of the collective Malika's Poetry Kitchen and a PhD by practice researcher in Goldsmiths’ Visual Cultures Department in London. http://www.khairanibarokka.com/ 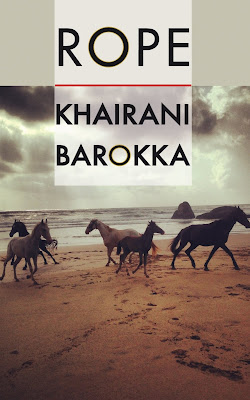 1) How long did it take you to put the manuscript together for Rope?

The oldest poem in Rope was begun late 2006-early 2007. If you want to time travel even further still, I was a toddler when I began to write poetry, so I suppose I’ve been working towards Rope slowly throughout life! It’s gone through several different iterations over the years, and I’m glad it’s in the form it’s grown to be.

Jane Commane of Nine Arches is a fabulous editor; we took a whole day to rearrange the poems’ order and work on editing some, then shared suggestions in the year between acceptance and publication. I appreciated that she understood Rope as a flowing thing, that there were themes that could loop back on themselves as you go on, rather than having a rigid, impermeable slotting of poems into categories.

3) And how do you feel about the book now?

It’s been a year and a bit since my first book Indigenous Species (an art book with one long poem), but only a few months since Rope—sometimes I still pinch myself that it’s real. I’m really very proud of it, and to have it in the company of other books I admire on shelves and in libraries. It’s made me more grounded in who I am as a poet, but also freer, to always push myself and go beyond, with a better understanding of what itches I’ve always been trying to poetically scratch, so to speak.

It recently inspired a reader to begin creative writing, which, as you know, is our overarching top-secret poets’ agenda, and that’s beautiful to hear. It’s gotten wonderful reactions from poets I really respect, as well as from strangers, and I just feel very fortunate. Also, by a complete stroke of luck, I was able to read from Rope on BBC Radio 2 with Jonathan Ross, which is still unbelievable to me.

Another wondrous turn of events was that before the official launch in London, British Council brought me back home to Jakarta for the UK/ID Festival, so my family—not just my immediate family and friends, but cousins, aunts, nephews, some for the first time—showed up to support me, and they all got to see Rope’s cover on a big screen in lights. It means a lot to me that my cousins’ kids (we all grew up together, so I call them all my nephews and nieces) and family who’d never seen me perform before got to appreciate that, that being a poet and artist is something that can be an important calling to someone, and a way to connect people. One nephew asked, ‘How come the family didn’t get to go up on stage?’ which I hope means he’ll grow up to become a performing artist!

I think, and hope, kindly, and with curiosity and appreciation. Having only lived in the UK for 2.5 years now, and not being British, I didn’t know what to expect, but people have been so welcoming. I think it’s easy for us to get excited about peers’ work here, since there’s so much coming out that’s brilliant. The best thing is when you find your work in conversation with other people’s work, and I hope that will always be the case. I keep track and post Rope coverage or reactions when I come across them, as it’s nice to have a record for yourself, and I always let my publisher know and vice versa.

6) Have you been writing poems since the book came out?

Yes, absolutely. It’s compulsion, procrastination, habit. I’ve nearly completed my second full-length collection over the past year, plus more poems for performance art projects past and future, including for my upcoming cross-genre manuscript, which has been my main project.

7) What do you think are the different pressures on you now as someone who has ‘published a first collection’? (And what does that even mean?)

Good questions! It means whatever the poet wants it to mean: a milestone, a stepping stone, a further introduction into who you are, a comfort, a spurring on, a revealing to self, a book as its own breathable object and individual wonder. I don’t feel pressure from anyone else but myself, and I’m very, very hard on myself in terms of wanting to execute more artistic creations to the best of my abilities. I think it also means relief, personally, and a reason to breathe deeply and be more grateful—for a book being out in the world, for being able to be a poet and have your work read.

8) How much do you need the validation of your work by others?

Nobody creates in a vacuum, and I truly believe everyone needs occasional validation to keep going and making. So in that sense, as much as anyone else. If I get the validation of poets I love, it’s just brilliant. I’m honoured that Nine Arches puts it up for consideration for prizes and that they and other people promote it, so just Rope behaving as a book, so to speak, is validation.

9) Which poems or poets are currently inspiring you?

10) What advice would you give to someone about to publish their first collection?

Relish everything. Thank everyone. This is a beginning.

11) What is ultimately the point, for you, of writing and publishing poems?

To live and be in connection, to trap things on a page that would otherwise worm themselves around in your head for nefarious purposes. Poems themselves are the point.

Reprinted from Rope by permission of Khairani Barokka and Nine Arches Press. ‘Pool’ was first published in the journal Tender.