The next interview is with Elizabeth-Jane Burnett who has a slightly different take on my questions, perhaps due to coming from a more overtly experimental background. Thank you to her for taking the time to answer them, and for being so candid. In particular I'm still mulling over one of her questions below: “What is the life of a book like?”

You can also read the previous interviews in this series here, with Joey Connolly, Khairani Barokka, Polly Atkin and Rishi Dastidar (and I have two more left to post).

Elizabeth-Jane Burnett is a UK writer and academic. Swims (Penned in the Margins, 2017) was a Sunday Times Best Poetry Book of the Year. Her monograph A Social Biography of Innovative Poetry Communities: The Gift, the Wager and Poethics was also published in 2017 by Palgrave (New York). She is a regular contributor to BBC3's Free Thinking and her forthcoming nature writing book/memoir The Grassling, A Geological Memoir won Penguin Random House’s WriteNow competition and is currently in development with them. She is Senior Lecturer in Creative Writing at Newman University, Birmingham.

Swims, published last year by Penned in the Margins, is her first full collection of poetry. 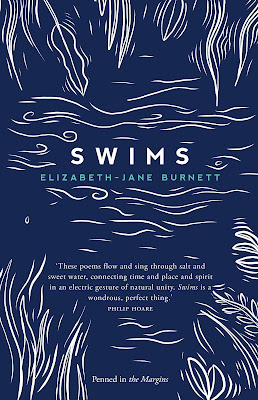 1) How long did it take you to put the manuscript together for Swims?

The first swim I took as part of the project was in 2014 and the collection came out in 2017, so, broadly, three years. Although I wasn’t working on it throughout that period – it was written around a full-time job and other projects.

There weren’t any significant changes.

It’s been about 6 months since publication. It came out the same month that my father passed away. The book was dedicated to him and it’s a sadness that he never got to see it. But the swims I took during his illness, and the poems that came from them, allowed happiness in at a time when that was missing. It was also a time when I had moved to a new city that didn’t have as many outdoor swimming opportunities, and I was balancing a heavy workload, so I wasn’t getting out into the open much. These planned swims were a lifeline for me in many ways and the book has all those associations of joy and release for me.

I’m still in shock that there are any readers! I’ve done so much with tiny presses, including very ephemeral work, so it’s been interesting reaching more people through a book like this. There have been some excellent reviews, for example, by Andrew Jeffrey for The Poetry School and Srishti Krishnamoorthy-Cavell in Poetry London. Richard Lea’s feature in The Guardian was heart-warming. I’m not a big social media user but I loved the interactions on Twitter and seeing the book out and about in people’s homes or on their commutes or wherever it had happened to reach! I also enjoyed what you did, posting excerpts from books you were reading, which included Swims (thank you!): that’s a great idea!

I’m not quite sure who you mean here and I don’t particularly track this. But I am interested in reaching readers in different ways and in exploring their responses. I talk a little about this in my monograph, A Social Biography of Contemporary Innovative Poetry Communities: the Gift, the Wager and Poethics (New York: Palgrave, 2017), and in the article: “Widening Audience: Difficult Knowledge, Duration, and Evaluation in Contemporary Ecopoetics Exhibitions in the UK” (forthcoming, Green Humanities).

I’m really thankful for the attention that Swims received, like the Forward prize commendation and the Guardian feature, and it’s undoubtedly brought the book new readers. But I don’t write with prizes in mind and rarely enter competitions. There are less opportunities in a prize context for more experimental work and I’d rather put the time into creating the work.

Yes. I started a project with Tony Lopez in 2016 about swimming on the Dawlish coast. My particular interest was in the invertebrates there, so I’ve been continuing that. There’s also a pamphlet, Rivering, due out with Oystercatcher that I’ve been toying with but I need to get back to the river Dart to properly continue it and I’m currently landlocked in the Midlands!

In many ways it doesn’t feel like a first book to me, as I’ve published pamphlets, multimedia bookworks and an academic monograph. But it’s true there is an external importance attached to the first collection. And that comes with a pressure (what is that pressure? I don’t know. That the next book lives up to the first? I don’t know what that means either. What is the life of a book like? Perhaps the pressure is just that you hope that the readership from the first book might stay with you for the second, though it may be markedly different). It would be terrible if poets allowed any such pressures to constrict them.

So much of the work is done despite what others think, if you’re working in non-traditional forms! But of course I am part of poetry communities and the support of these is invaluable. Readings of the work, both in-progress and once published, are also key. I don’t know if it’s validation exactly, but a sense of connection with audiences is crucial.

I am often inspired by poetics/theory and at the moment I would say Juliana Spahr. I’m also co-editing a #metoo feature for the Chicago Review and the work coming in is phenomenal. My co-editor Emily Critchley’s Ten Thousand Things is quietly wonderful and I’m also reading my Penned in the Margins stablemate Meryl Pugh’s debut, Natural Phenomena.

Expressing my selves in ways not wholly formed by patriarchy. Friendship. Getting a closer match between the forms of my communication and the forms of my selves. Kinship. Being part of communities with values beyond the commercial. Giving. Finding things out. Getting to grips with. Offering new ways of doing things. Sharing new ways to live. Resisting. Re-fuelling. Joy.

The Barle creases land between stitches
the earth has gathered into hills.

We enter here, along the fold, cut water
with the scream that pours from us,

cold and clear and bodied,
follow the will of the current down,

past bumps of trout and damselflies,
swallow sweet spasms of buttercups

where the sun spots us under
the surface, falling faster,

less against rock, knee-knocked,
as in Fukushima, where fishermen

record radioactive caesium in fish,
three years after the earthquake,

three years on from this tsunami:
I can no more take this out

of the poem as out of the water.
A flock of starlings floats above,

where there should be flight,
treading water.

they make the sky
a spill of purring tar.

Though we leave the water,
there is no emergence.

Reproduced from Swims by permission of Elizabeth-Jane Burnett and Penned in the Margins.

Update: The sixth interview is also up now, and is with Emily Blewitt talking about This Is Not A Rescue.