Here's the next first collection interview! It's with Emily Blewitt, who has a really pragmatic approach to the whole "what does having a first collection really mean" thing I think. Thank you for the interview, Emily! You can read the other interviews on this blog too, with Joey Connolly, Khairani Barokka, Polly Atkin, Rishi Dastidar and Elizabeth-Jane Burnett. The last interview will be going up tomorrow.

Emily Blewitt is the poetry editor of New Welsh Review. She has published poetry in The Rialto, Poetry Wales, Ambit, and The North, among others, and was Highly Commended in the 2016 Forward Prizes. Emily has appeared at Hay Festival, on Radio 4, and participated in the Weird and Wonderful Wales project. One of her poems appears on public transport in three Chinese cities as part of a British Council initiative. Emily lives in Bridgend, South Wales, with her husband, Greg, and their fat black-and-white cat, Ozymandias (Ozzie).

Her first collection This Is Not A Rescue was published last year by Seren Books. 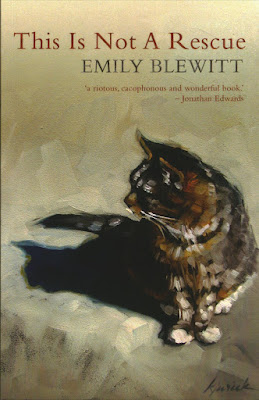 1) How long did it take you to put the manuscript together for your This Is Not A Rescue?

It took me roughly five years, although for most of that I didn’t know I was writing a collection. The oldest poems in TINAR were first drafted in 2009 and 2010 – and survived many culls! Most of the poems were written much more recently, though. Quite a few of them were written intensively, after a residential course with Kim Moore and Jennifer Copley at Grange-Over-Sands in 2014. That course gave me a lot of creative space and a confidence boost. And when I came back, I had the bare bones of the collection. I began putting the manuscript together then, and submitted it in 2015.

The title changed: it became This Is Not A Rescue after that poem was highly commended in the Forward Prizes, which I took as a sign. In fact, that particular sign showed me what the overall theme of the book was, and helped with the creation of the final manuscript. Some poems were removed, some new ones were written, the whole thing was reordered and shaped again and again. My editor had warned me that she would be ‘picky’: the eighteen months between acceptance and publication were very busy!

I am proud of it, and incredibly grateful that someone wanted to publish it – and that they have done such a beautiful job. It’s a gorgeous object, and I have the team at Seren to thank for that. And its publication has been life-changing, which sounds dramatic but there it is. The book has opened doors. Even the simple fact of holding it during a reading makes me perform better: I stand up straighter, am more engaging and confident, have more fun.

Readers have been really positive and supportive. I’m so pleased that the poems in TINAR speak to people.

I’ve been lucky enough to receive very good reviews for the book. My publisher tracks them and then provides excerpts on my author webpage. The poetry community in Wales is particularly tight-knit, and extremely supportive in my experience. My extended poetry community – those poets outside my immediate locality, some of whom I have never met – have been generous.

Prizes are a bit like books, in that (I imagine) they are wonderful, door-opening things. But I also think that it’s probably harder for independent publishers to enter their books into them, as they have limited financial resources. I would love to be shortlisted for or win something (who wouldn’t?) but I would also be flabbergasted!

Yes – thank the gods. I wasn’t sure I’d be able to do it again. I’m working on my next collection, which I’ve just received a Literature Wales Bursary to help with. It picks up and develops some of the themes first touched upon in TINAR, particularly those to do with my mother and the impact of sexual abuse. Its working title is The Daughter Speaks.

Well, there’s that ‘difficult second album’ conundrum now. And I suppose there’s pressure to top the first book – both self-inflicted and external. I want to carry on writing poems, and develop as a writer. But I have to pretend that that doesn’t matter at all: if I become too self-conscious, I find that crippling.

Validation is very satisfying. But I try to remember that if nobody liked my work, if nobody wanted to publish my poems, I would still be writing. I think that in other aspects of life (like in relationships, for example) validation is important but ultimately not the most important thing. My family love my husband, for example, but if they didn’t he’d still be my husband. I’m the one that’s married to him. It’s my life/ decision/ poem.

So there are fantastic ‘enabling’ poets who help me write because they give me the burning desire to join in. At the moment these poets include (but are not limited to): Kim Moore, Polly Atkin, Maggie Smith, Aimee Netzhukumatathil, Jonathan Edwards, Kate Clanchy, Kate Clanchy’s students (all of them: they’re amazing), Helen Mort, Roy Marshall, Lorraine Mariner, Maggie Harris … Quite often, I’ll hear a poet perform and their work will suddenly open up. It’s not always about reading quietly. I like listening too. I’m also reading submissions for New Welsh Review at the moment, and there are some cracking poems in there.

Enjoy it. The last few months and weeks before it comes out may be stressful. Just work hard at it, listen to your editor, and remember it’s your book. Thank your readers, helpers and influences. Dedicate the book to your cat. Accept that this might make you more or less popular in certain circles. Read the reviews with a pinch of salt. Let them go.

I want to create something that connects with readers. I want to represent experiences that are important. I want to notice the world around me. I want my writing to be funny, sexy, true, moving, complex, accessible, vital.

This Is Not A Rescue

I want to tell you it will not be as you expect. For years
you have hammered in stakes, handed men the rope and said
consume me with fire. Most have run – one does not burn
a witch lightly. This one is water. He’ll unbind you, take
your hands in his and say remember how you love the ocean?
Come with me. You’ll go to the beach on a cloudy day, watch
foam rise from the sea’s churn until sun appears. In turn
you’ll say let’s go in and even though he hesitates, this man
will kick off his shoes and wade to his shins. Jellyfish,
shot with pink like satin dresses, will dance between you, flash
iridescent. His body is all whorls and planes like smoothly sanded
planks used to make a boat, his ears are pale shells you hear
the waves in, he smells of sandalwood and salt, his eyes
are ocean. He’ll spot the pebbles that in secret you have sewn
into your skirts and give you his penknife to unpick them.
You can’t swim with those. He’ll teach you to skim. The pebbles
break the surface like question marks. You’ll throw each last one in.

This poem is reprinted from This Is Not A Rescue by permission of Emily Blewitt and Seren Books.