Here it is, the final first collection interview, with my own Bloodaxe stablemate Nia Davies. Thank you for reading these over the past week - I've found them really interesting to do, and I'm very grateful to everyone for taking the time to talk to me.

I thought the interviews would be best served by being posted all together like this, so you can see where poets differ (or are similiar) in their thinking. I don't think there are any right or wrong answers, and the whole process has made the idea of having a first collection published feel less lonely to me. As you may have inferred from my questions, I have a complicated relationship with the need for external validation, and it has been really reassuring to hear other people talk about that too.

You can read the other interviews on this blog, with Joey Connolly, Khairani Barokka, Polly Atkin, Rishi Dastidar, Elizabeth-Jane Burnett and Emily Blewitt. Of course there were so many people who had first collections published last year too (it was a very busy year!), that I might have interviewed double, or more than double, the amount here, so apologies to anyone who wasn't included.

Nia Davies was born in Sheffield and studied English at the University of Sussex. She has been editor of Poetry Wales since 2014 and has worked on several international and collaborative projects such as Literature Across Frontiers, Wales International Poetry Festival and Wales Literature Exchange. Her poems and essays have been published and translated widely and she has appeared in several international festivals. A frequent collaborator with other poets and artists, she co-curated Gelynion, a Welsh Enemies project on collaboration in contemporary poetry in Wales in 2015. She has published three pamphlets, Then Spree (Salt, 2012), Çekoslovakyalılaştıramadıklarımızdanmısınız or Long Words (Boiled String, 2016) and England (Crater, 2017). In Interversions (Poetrywala, 2018) she documents her collaboration with Kannada poet Mamta Sagar. She is currently undertaking practice-based research at the University of Salford.

Her first full collection All fours was published last year by Bloodaxe Books. 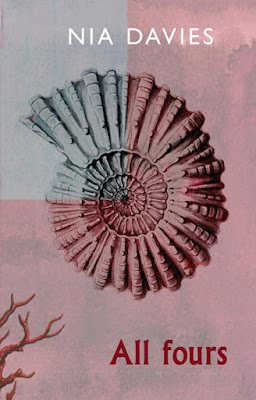 1) How long did it take you to put the manuscript together for All fours?

The poems in All fours were written between 2012 and 2015 so three to four years.

Hardly, maybe the order of poems was slightly altered and small edits were made.

All fours feels like a distinct period of my work, different from my current work. This was a lyrical riddling phase which I've captured in book form. To exchange this with people as a book, the book itself, is a joyous feeling.

I love being surprised how different lines, poems and projects resonate with different people. The feeling of my language having been noticed and engaged with encourages me to continue. But it's the performance of what's in the book and conversations with readers in person that sets up the opportunity for these responses from readers. I don't get to enter a reader's living room and head.

Well... I'm not sure I have an accurate overview of what the 'poetry community' thinks, or even if I know what such a community is – I only know what I have encountered in person, through friends and in reviews, comments passed on to me etc. All of this has been positive (maybe people are too kind to pass on the negative comments!).

I haven't been reviewed in the mainstream London-based poetry publications this time. It was on a few 'books of the year' lists. It's mostly been these informal responses and online reviews. Bloodaxe track the responses and let me know when something is mentioned or reviewed.

The most pleasing thing about these responses has been the reports that people found the book comic. Others saw something new in it which is also heartening.

Now that you've asked this, I'm wondering if there might be another way to receive wider responses from readers and poets alike outside the ones I've just mentioned. It does feel a bit patchy basically relying on word of mouth and reviews. Do you have any ideas? Maybe if some kind of mass recommendation chain? [CW – I don't want to insert anything here, but would welcome suggestions and discussion from those reading this!]

There's so many amazing books out there that deserve recognition so I am happy when prizes go to them. Some of the prize lists still seem stuck in another bygone era, traditional and monocultural. But others highlight work that should be recognised. I never seem to think that prizes represent the 'best' but that they show some consensus from one corner of the poetry world.

So in the context of using prizes as a way of judging response to my book it seems a bit much to expect as there's only a few prizes and many many deserving books. Again then, perhaps there is a need here for something else?

Poetry has been happening, if not many distinct ‘poems’ – rather hybrids. Firstly between collage/book-making and poetry. Then between prose/memoir/essay and poetry. And then, now, performance making. And a few traditional lyric poems.

I've been involved in several collaborative projects too: books, a letterpress publication with Crater called England, an art-object book Key Blank with the Literary Pocket Book. I'm right now working on a performance with Rhys Trimble 'Cynhebrwng Aer' which we are about to air at the Poetry in Expanded Translation 3 in Bangor next week. A project 'Interversions' with Mamta Sagar in India is also now a book from Poetrywala and I also had a video poem made with Lucia Sellers 'Oceanik'. So a lot is happening!

I also continue to edit Poetry Wales and will also be judging this year's Ledbury Poetry Competition – so my work as a poetry curator is also ongoing and very much a part of my creative production.

I've done several other publications (pamphlets, art-books etc), projects and performances which were major developments for me. This means that, although this is my first full-length collection of poems, I don't feel much pressure as if All fours was my first book. So I don't feel a different kind of pressure personally but there is a subtle difference. I have had more invitations I think as a result of the book – to festivals for example. So there obviously is some kind of milestone with having a first collection to one's name.

There is the pressure to make sure the book remains visible which is an ongoing challenge when you are making new work, making a living etc.

Interesting question. Certain kinds of validation motivate me to continue. The most encouraging I had recently was from young people in India where I have been working quite a bit recently. Their engagement reminds me what is possible and why do it. Then there's the other kind of validation from practitioners I respect, especially if it comes with feedback/criticism – this is extremely useful validation. But at some point I stop thinking about this and really only go on what I feel is most urgent and pressing for me at the time, and that motivation to work is a complex thing but it is surely relational if not entirely dependent on the validation of others.

The Vachanas (trans. AK Ramanujan), Jerome Rothenberg's 2017 edition of Technicians of the Sacred and his own work Eye of Witness, NourbeSe M Philip's Zong!, Bhanu Kapil's two most recent books.

I'm currently researching poetry and ritual for a doctorate so I'm very interested in performances. One amazing one recently (well maybe not so recent, time flies) was Maggie O'Sullivan at the Outside-In Poetry Festival in Glasgow, October 2016. Holly Pester was also great there.

I was recently part of a project called 'Poetry Connections' from Literature Across Frontiers where pairs of poets from Wales and India collaborated. The books that came out of that (from Poetrywala) and the performances and translations also gave me inspiration. I worked with Mamta Sagar and our project is called 'Interversions'. Mamta is very inspirational.

Another project providing inspiration is the Poetry in Expanded Translation project, some of the work I've published in Poetry Wales.

Maybe the usual applies. To publish is to make something something public, to make it in many ways 'final' in perpetuity. It may also disappear, that's always possible, but for the most part it is a trace, a residue in material form. So my advice would be think about what that means to you, what's it for and thus will the publisher do the needful? Will I be holding something in my hands I am happy to give/sell?

But the above is really advice for those putting together a first book for publication rather than those about to publish. When you're about to publish there's really no going back and it's mostly advice around promotion which is is well... freely available. Lately I've been developing experimental ways of performing or presenting the material in the book so that the poems have another life. For example I have a performance for the poem '& blow in the god's good wake to leave only pounded dust' which aims to embody the desires of Eurydice. It involves almost-violent action and has been very intense to perform.

I've just been reading Jerome Rothenberg's Khurbn poems. This work reminds us why we write and publish poetry after Auschwitz and after the worst of the worst since. Poetry as the shit of life as well as the beauty. One point of poetry may then be to listen to the voices of the dead.

There are as many points to doing this as there are many poems many performances many human lives. So I'm afraid I can't give a straight answer; the point is multiple, shifty and semi-obscured, partially mysterious. Poiesis is making something out of nothing so I guess there are as many reasons as there are reasons to do anything at all. For me personally each poem or work has had the following points: Love. Death. Desire. Ritual. Occasion. Outrage. Fear. Nothing. Boredom. Mania. Resistance. No point. Pointiness. Healing. Harming. Just to do something...

Because I was sleeping all over here,
and here. The magnesium intake nightly,
the slosh of the road in the distance.

Heaven had already soiled me.
Who's that scaling the terraced garden?
I opened one eye in the dark,
then someone braver opened both.

I made to swing out of a lime tree,
said deepen, foster. Thought of when I was young,
I would think selkies, think skerry calf.

I would listen through lids,
less scathing, less scrape and tangle.
An alarm sounded and everyone ignored it.

Reproduced from All fours by permission of Nia Davies and Bloodaxe Books.